Disruptive Innovation or the Third Way (a family of complementary innovations around company’s core product or service)? A heated debate linked to the release of a book (The Power of Little Ideas: A Low-Risk, High-Reward Approach to Innovation) and the fact that the shared economy seems to mark the pace. As promised in my previous post, I keep telling here some top issues that have crossed my life. If I had to rely on what I experienced, my conviction would go to David Robertson’s thesis and therefore the third way. First of all, however, I’m clarifying the difference between the various types of innovations.

Disruptive innovation is a term in the field of business administration which refers to an innovation that creates a new market and value network and eventually disrupts an existing market and value network, displacing established market leading firms, products, and alliances. The term was defined and first analyzed by the American scholar Clayton M. Christensen and his collaborators beginning in 1995,[2] and has been called the most influential business idea of the early 21st century.[3] 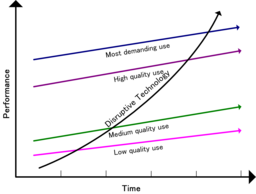 Disruptive innovation is reputed very good because it is opposed to the incremental innovation which is typical of large corporations: “disrupt or be disrupted” is now a mantra. According to David Robertson, however, there is another way to innovate (the third way).

“This third strategy consists of creating a family of complementary innovations around a product or service, all of which work together as a system to carry out a single strategy or purpose”: reconnecting with their “true” customers and returning to being an irresistible product for them. David Robertson defines it as follows:

If I look at my life, I have always carried disruptive innovations. I started at school. I did the whole cycle until eighth grade with the Montessori method and then up to the third year of high school in a school experimenting the Rogers method of student-based learning. At the end of the third year I decided that I wanted to quit quickly and exploiting the “Gentile norm” (Which allowed student younger than 18-year-olds to take final exam as long as they had 8/10 in all subjects) I did the fourth and fifth grade together in one year. I did the final exam old-fashioned with a test on all subjects. So I went to college at the age of 17. In my family all persons were medical doctors, my grandfather, my father, my mother and my uncles.

So even in college I employed disruptive innovation: I have enrolled in Statistical Sciences to become an economist! At the end of the third year, instead of continuing on a path that would have led me to be a professor of economics at some foreign university (as all my group of colleagues are today) I decided I don’t want to become someone who explain things when they have happened but someone being able to deal with the real world while things happening. My prof. Paolo Sylos Labini used to say to “If economists were able to predict, they would be rich. Do you know some rich economists?”.

So I was devoted to innovation and make it my job. At first I started dealing with it in energy policies, at ENEA, then in artificial intelligence at Italsiel and MIT and then in multimedia with STET and Microsoft. Every time my life was marked by disruptive innovation, an unexpected and revolutionary turning point.

On the edge of the cliff

So abandoning the safe harbor of a stable high level job (I was the youngest executive manager of IRI’s history) for the entrepreneurial venture. Always a risky jump! A bit as David Robertson says in his book, it happened to LEGO®:

LEGO’s reaction to competitive threats and market shifts in the late 1990s caused the company to innovate away from its signature snap-together bricks in favor of diverse new products […]. Its attempts to create a revolutionary change almost pushed the company into bankruptcy

I have also been on the edge of the cliff due to disruptive innovation. What saved me was reconnecting with my key competencies and creating a relationship with my core client to return to being perceived by them having an irresistible product / service. How did I do it? As David Robertson says, with a series of innovations within my core product / service. Innovations related to learning and mastering digital marketing and transformation, the Design Thinking and U-Lab approaches and above all the learning and mastering of the LEGO® Serious Play® methodology, which enhanced my skills by giving me a “fair advantage” on my market.

In your life what kind of innovation did you practice? Incremental? Disruptive? Or did you also take the third way?

This site uses Akismet to reduce spam. Learn how your comment data is processed.

This website uses cookies to improve your experience while you navigate through the website. Out of these, the cookies that are categorized as necessary are stored on your browser as they are essential for the working of basic functionalities of the website. We also use third-party cookies that help us analyze and understand how you use this website. These cookies will be stored in your browser only with your consent. You also have the option to opt-out of these cookies. But opting out of some of these cookies may affect your browsing experience.
Necessary Sempre abilitato

Any cookies that may not be particularly necessary for the website to function and is used specifically to collect user personal data via analytics, ads, other embedded contents are termed as non-necessary cookies. It is mandatory to procure user consent prior to running these cookies on your website.